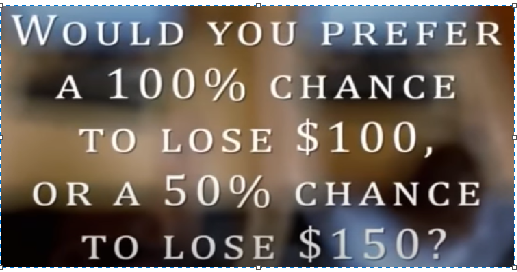 People always say that 90% of traders fail, only few make money in markets. What separate the winners from losers? What these 10% of people know about that rest of the 90% people fail to notice? To find that, there was an experiment conducted by a University in France that deals with behavioral finance, they selected a group of volunteers and given a set of questions which basically test their attitude towards risk.

A group of students were given two options to choose from,

Which one Would you prefer?

When we posted the same question in Telegram and Twitter, more than 70% of the people opted for Option A.

Which signifies the fact that people do not want lose an opportunity on making a confirmed profits,doesn’t matters if its smaller, even though they were given a chance to make higher profits, they are content with lower profits because they want to be certain, they are happy with the Rs.1000 profits which is in their hand right now, than the Rs.2000 profit that may or may not come tomorrow.

Now the University opted to change the question to the same volunteers.

The question is changed from Winning to losing, what would you choose from the below option?

When we posted the same question in Telegram and Twitter, more than 70% of the people opted for Option B.

Now the attitude completely changed, people wanted to take chance this time when they were given a chance to lose, they prefer to bet on that 50% luck.

Consider you buy a stock Reliance, you enter at Rs.1100 and you exit at Rs.1500, you are happy with the 40% profits but you don’t want to hold to the stock, even though the stock had the chance to go to Rs.2000, a chance to make 100% profits, still you exited at half the price. Because tomorrow the stock may come down, you dont want to take that chance. So you exit with limited profits.

Then stock dropped, dropped, it kept going down, but you did not exit, because you are still hoping that stock would bounce back one day, but that one day never came. Eventually you lose more than what you gained in other trades.

We are reluctant to book loss, because we want to take chance. As 70% of people voted, most of them dont want to book loss, they wanted to wait further, this is what you call it as taking a chance.

Many people when given first option, they go with the smaller win amount that are certain, they don’t want to take chance. They want the guaranteed win.

The pain that you get in losing trades is always much higher than the feel good factor that you get in winning trade. This fear of loss, put the traders into larger risk, instead of getting out at smaller loss, they hope, they pray, they wait for market to reverse so that their loss would be minimal. They are ready to take that chance.

But the same people when it came to profit booking, they get out quickly after they see a fixed profit, when they make 1000 profit, they try to close it. But when they see loss of 1000rs, they want to wait more, they rely on chance that it would reverse in their direction sooner or later, so they stick to their losing traders longer.

We should always cap the risk, you should know how much you are willing to lose before you put in the trade, be certain how much you are willing to lose and leave the profits to the markets. That’s how most of the professional traders make money, they want to be certain with what they want to lose, you just have to live another day to take that risk, that’s what all you need to survive in the markets. Don’t take chance on your loss be certain.

7 comments on “Why most traders fail, how can they fix it?”