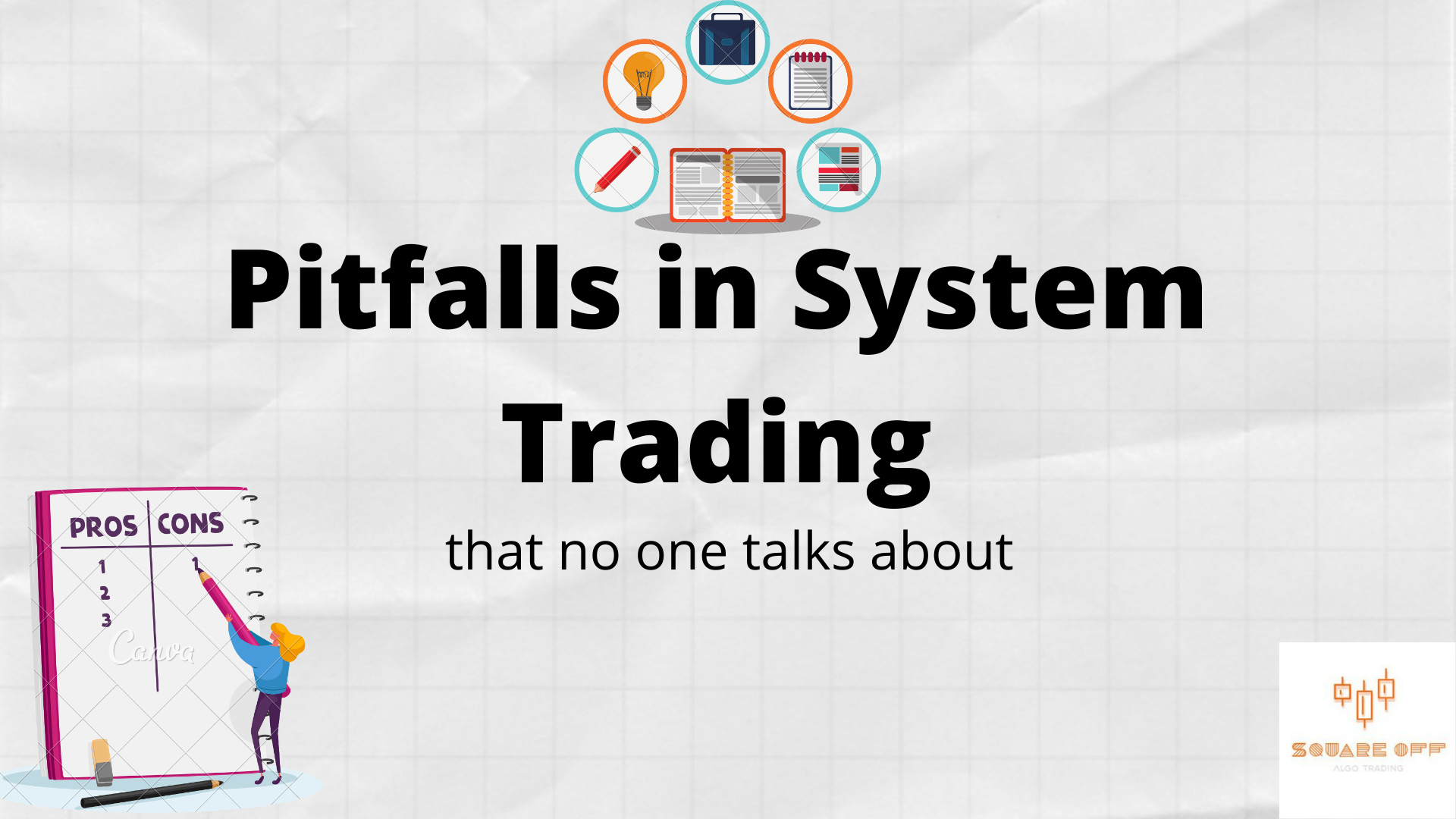 In recent days, rule based trading or mechanical trading system is on limelight. Every beginner considers that system trading is the answer to profitable trading journey. It is projected in such a way that, everyone who gets started with system trading thinks that it removes human emotions, it helps to make profits most of the time. But there are certain pitfalls in mechanical trading system that no one talks about. In this article, we will address some of the important elements in system trading which is overlooked by many traders.

Many traders after spending so much of time in backtest, when they finally get started with live trading all they have in their mind is all metrics like Profits, max loss, max drawdown, losing streaks etc. But they hardly give importance to no of days a trading system stays under water.

When your trading system is not performing well for weeks, months, first think that comes to your mind is

Even though your overall drawdown percentage is lower, if your time drawdown is higher it really puts a lot of pressure in our mind. A typical trend following or breakout system stays in drawdown most of the time. Consider the below live performance of famous hedge fund manager Bill Dunn, where he has been trading live with millions of dollars using a trend following principle for 40+ years.

As you can see, there are 13 times where his drawdown was greater than -25%. His funds equity curve hit all time high in the year 2002 and it took almost 8 years to get back to new equity high. How many fund managers out there can handle such a long time drawdown? Definitely 99% of us can’t handle it, if our system is not making any money for few weeks, we tend to stop using the system.

Even though we know trading outcome is completely random in nature, most of the traders abandon their trading system if it fails to make profits in first few trades. They are okay if it makes profit initially and then goes in drawdown or faces streaks of losses. But if the system starts giving them losing streaks during the initial phase, then instantly dump that system and start looking for new trading system. This cycle keeps repeating. So never make hasty decisions based on the first few trades when you start using a trading system.

Yes, you read that right. If you look back the history, be it trading or be it life in general, it’s not our fear which does more damage, its always our greed which puts us in trouble most of the time. Winning streaks gives us overconfidence, it makes us beleive that we are in control.

So we tend to increase our position size or we start trading with higher lot size right after series of winning trades. A guy who trades with two lots, might jump to 20 lots. Then what happens? A series of losing trades follows which damage his confidence, then he will get back to his old lot size. So do not increase your capital or lot size just because you are witnessing streaks of profits back to back.

Even though it is the system or Algo or machine which executes your trades, where you just go by your own system rules, you cannot remove emotions completely. You can just manage your emotions to certain extent with system trading but you can’t avoid emotions. It will always be there because it’s still the humans who are in control of the algorithms we run. Most system traders tend to check MTM, Pnl once in a while. And there are some system traders who switch off their Algo or trading system during event days. So emotions are not completely eliminated. Many still override their own system at times.

We really feel down during drawdown phase and feel super excited when our equity curve hits all time high. This feeling of ups and downs will be there with system trading as well. The major difference between a system trader and a discretionary trader here is, we system trader go by rules, have a process and rely on law of large numbers. So during drawdown phase, we keep telling ourself that we will eventually come out of this drawdown soon. There will be strong conviction which keeps un intact.

But traders who don’t follow system trading will not have any process. When there is no process, it puts them in enormous pressure during drawdown phase or losing streaks. That’s why having a trading system helps to certain extent in managing emotions.

Brokerage is not your transaction cost:

Many traders reduce a fixed percentage with every trade to arrive at the transaction cost and few still consider just 20rs per trade as their transaction cost. Other than brokerage we end up paying 6 different charges

But in 200 Rs. profit, there are multiple cost you end up paying, Rs.40 is gone for brokerage assuming Rs.20 per order, so buy side Rs.20 and sell side Rs.20. Then you pay 0.0019% of turnover as exchange transaction charges.

Adding up all charges, its around Rs.176.5, so in Rs.200 profit you ended up paying Rs.176 as total transaction cost, so simply we should not calculate only Rs.40 brokerage we pay is our charges.

It really takes lot of time and effort to come up with a trading strategy that has positive edge. Creating strategy is made lot easier now with NO CODE backtesting platforms. It also increased the chance of developing curve fit system. We need to avoid lot of noise to come up with a good trading system. So do not get frustrated because you couldn’t develop a trading system, it really takes lot of time.

If you are spending so much of time in coming up with one perfect system which works in all sorts of market conditions, then you are actually wasting your time. It doesn’t exist. Professional traders know it, that’s why they run multiple uncorrelated strategies not to make profits on every market condition but they run such multiple systems to reduce the volatility of their portfolio. They understood that only way to become a profitable trader is too survive during adverse period. With just one trading system, its really hard. We should stop comparing our trading system with others, if you don’t stop then you will never be satisfied with your system.