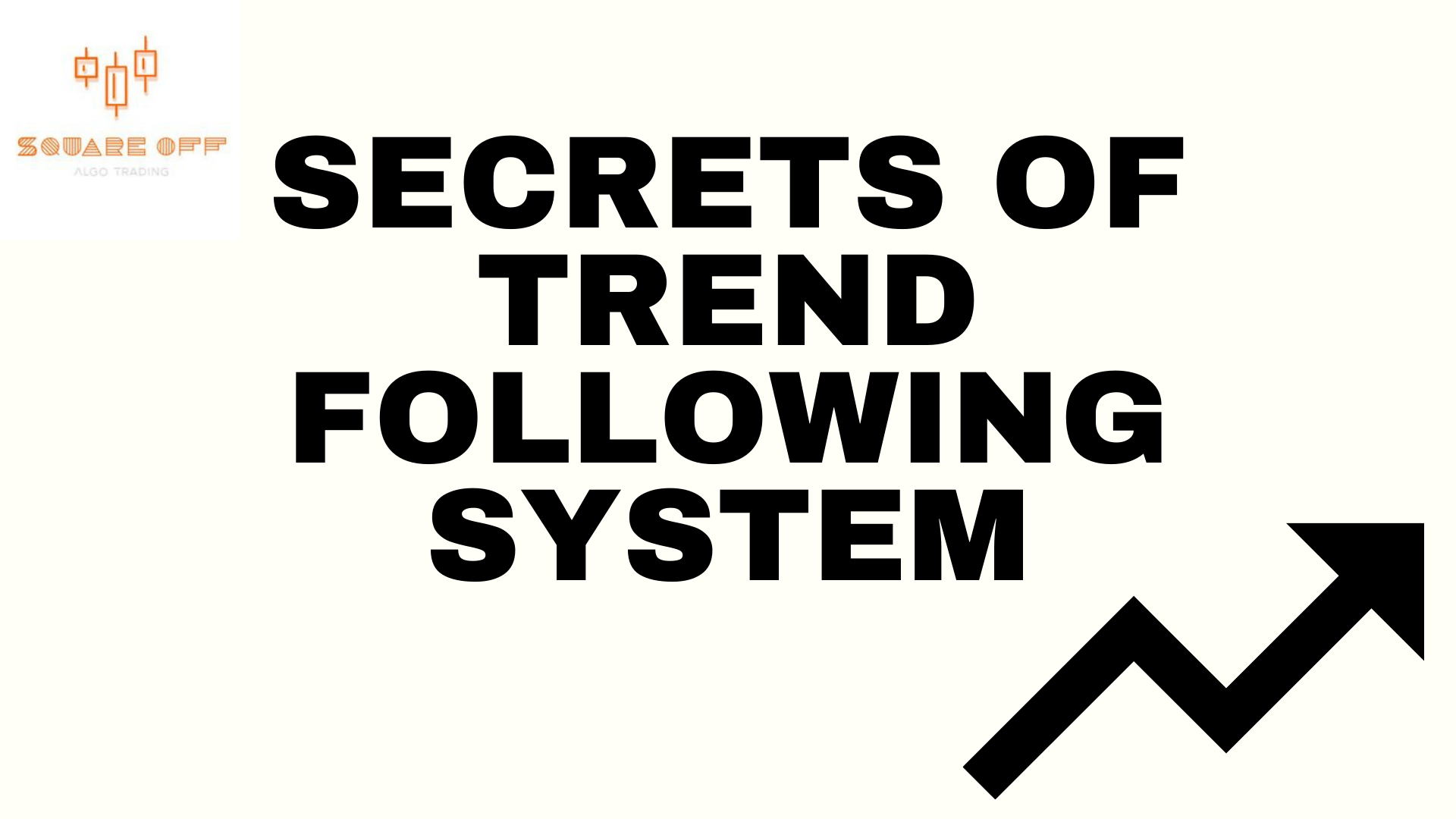 When things happen we don’t expect, trend following works beautifully in such periods. Trend followers love the uncomfortable moments, the unexpected new normal. The abnormal disruptive change, can cause market prices to trend strongly. This is most evident during periods where things are most uncertain

Remember the 2020 Corona Crash? The 2008 Global financial crisis? Dot com bubble? During all these adverse periods, trend followers were able to make tons of money both on downside as well on the upside during recovery phase.

Trend following system makes outsized returns during these crisis periods and rest of the time they will be in drawdowns or stay flat. We can’t expect trend following strategies to make consistent returns month after month.

Jesse Livermore was a stock trader that amassed a huge fortune worth $100 million ($1.5 billion in today’s money) at his peak in 1929.

1929 was the Great Depression period which witnessed one of the worst crash in stock market history.

Richard Dennis, the famous turtle trader In the early 1970s, borrowed $1,600 and reportedly made $350 million in about six years

What’s common among all these traders who made millions? They all are trend followers. There are 100s of research papers published based on 100 to 200 years of historical data which states that trend following works well for many decades because all such big movements are primarily caused by human emotions greed and fear. Technology may evolve, market dynamics might change but the human emotions who makes their trading decisions primarily driven by greed and fear will never change.

Trend following mainly works against human nature. The main gist of trend following system is buy high and sell higher. Let’s say you wanted to buy a laptop in amazon and see that its available around 40k.

Now what would you do? You might wait for few more days to see if the price goes down. Next day, if the price increases to 45k, will you buy it? Definitely not, right. Because you have already saw that laptop was priced around 40k, now it increased further. As long as it is available above 40k, you won’t buy it.

Lets compare that with trading. Consider the stock BSE which moved from 500 levels to 1000 levels in few months, every indicator would show that the stock was in over bought zone. The stock already rallied 100% so we will think how far it can go further? Its better not to buy this stock, instead let me look for some other beaten down stock and buy that so that there is a chance of making money when that beaten down stock bounce back.

But look what really happened? Same BSE stock which was shown as overbought near 1000 levels, rallied 200% more and moved to 3000 levels now. Just because a stock moved up a lot, doesn’t mean that it can’t go higher anymore. Trend following is all about being comfortable with buying at high price with expectation of selling it later at a much higher price.

The same is applicable for downside as well. Paytm stock after listing, it kept on going down. When it reached around 1300 levels, many indicators would suggest that as over sold region. That too for an IPO investor who bought the stock around 2000 levels, this price of 1300 seems attractive, so he would have went ahead and bought more to bring down the buying average price.

But look what happened to Paytm stock now? It crashed even further and gone down more than 50% from where it was marked as oversold.

Trend following is all about being comfortable with taking small losses regularly in order to enjoy that few big wins which comes once in a while. Most of the trend following systems will have winning accuracy of less than 50% but risk reward ratio is usually more than 1:2

Let’s consider you are trading a trend following system and you have taken 10 trades. The outcome of the trades are listed below

Out of ten trades, you lost in five trades and made money in five trades, with risk reward ratio of 1:2 you must have made profits right?

The trading system is same, the trading outcome is same, rules are same but still two different result, one guy blown up the account and other guy made 5% returns. Just having a trading strategy is not enough, we need to apply proper risk management to withstand series of losses.

If you are using a trend following strategy, if you observe your journal closely you will find that 80% of all your profits comes from less than 20% of trades. That’s many pro traders suggest not to use any fixed targets when it comes to trend following. Because few large gains is essential to make up for the many small losses we face down the line.

Let’s look at the most successful Indian Stock market Billionaire investor Rakesh Jhunjhunwala’s portfolio, even though he holds many stocks, Titan and Escorts contributes 80% of the wealth he generated.

Even if we look at the Nifty 50 stocks, listed below 10 stocks decides the movement of Nifty, the rest of the 40 stocks doesn’t play any vital role. However only these 20% of the entire Nifty 50 decides where Nifty should move. So the 80% of Indian Stock market movement is decided by 20% of stocks.

This is what you call it as Pareto principle, that is being applied vastly in many businesses. Consider ITC, where does major revenue come from? In cigarettes, their 80% of the revenue comes from less than 20% of their business.

Let me explain with real time example, Golden Ratio Bank Nifty strategy which is one of the top performing Square off trading bots that made 240%+ returns so far in last one year. The outlook may look smooth and easy, but if we dig deep we will know the real picture behind such outstanding returns.

The Golden Ratio strategy has been tested with last 10 years data, this is how the PnL looks like in terms of Bank Nifty points. As you can see, the max loss was between -100 to -300, but the profit points it made was from 100 points to as high as 2000 points. As we discussed earlier, this is the perfect example of cutting your losses and riding your winners. If you keep a fixed target and trade a trend following or breakout trading system you are not going to make large wins and those large wins are essential to compensate for the regular small losses we make. That’s why we never recommend fixed targets.

If I try to sort the results based on profits, I can know what are the list of trades which has made huge gains. The Highest profits came during last year due to corona pandemic crash, followed by a list of other huge gains. In the last ten years, this strategy has generated 1200 trades with total BNF points of 43,350. Now if I calculate how much profit was generated from this top 20% trades, its whopping 71,000 points. If we remove this top 20% results, we will end up in net loss.

But is there a way to capture only those top 20% trades? No way, we can never know what’s going to happen with our next trade. Predicting the trading outcome is a waste of time, no one can predict stock market movement. The only way is to accept that each trading outcome is random in nature, as per the Pareto principle once you follow a trend following or breakout trading system or even if its long term investing, once in a while you are going to make very big profits, but in order to make such big profits we should be ready to take every single trade without worrying too much about the outcome. Eventually over the long run you are going to be profitable.

(11997)
₹209.00 (as of May 19, 2022 - More infoProduct prices and availability are accurate as of the date/time indicated and are subject to change. Any price and availability information displayed on [relevant Amazon Site(s), as applicable] at the time of purchase will apply to the purchase of this product.)

(4154)
₹399.00
Paul Asset
(as of May 19, 2022 - More infoProduct prices and availability are accurate as of the date/time indicated and are subject to change. Any price and availability information displayed on [relevant Amazon Site(s), as applicable] at the time of purchase will apply to the purchase of this product.)

(981)
₹299.00 ₹250.00 (as of May 19, 2022 - More infoProduct prices and availability are accurate as of the date/time indicated and are subject to change. Any price and availability information displayed on [relevant Amazon Site(s), as applicable] at the time of purchase will apply to the purchase of this product.)