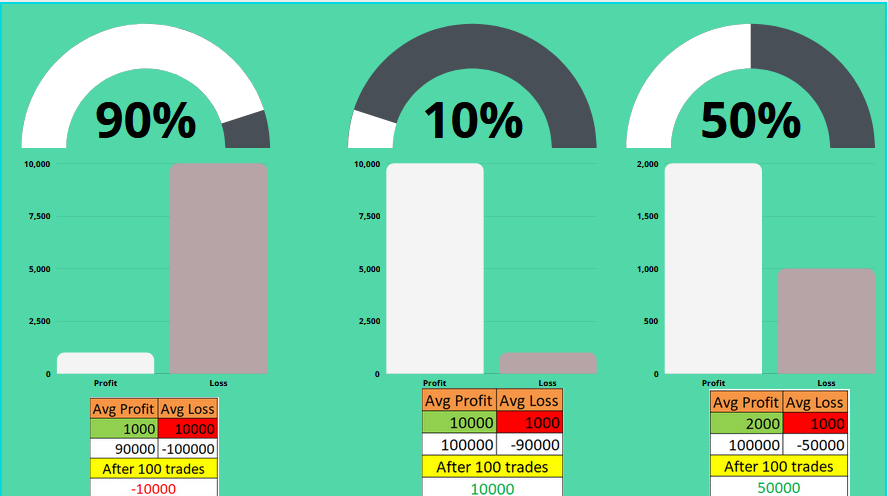 Algo Trading is gaining popularity among Indian traders and every year a lot many algo platforms are coming with plenty of algo strategies. Earlier many traders were trading based on discretionary without any rules based approach. Now a lot of traders are ready to move to algo trading but confused with a lot of options. When you are bombarded with tons of different trading systems, how do you choose the best one? In this article, I will explain what are the parameters one should look for in a trading system?

Many traders still think winning accuracy is the most important parameter in a trading system. But is it really true? Let’s check this example. Consider, we have three different trading systems. System A, System B and System C.

Similarly for System B, The average profit in a winning trade is Rs.10,000, that is 10% of the time System B is capable of making Rs.10K profit, which is ten times higher than its losing trade. The average loss in a losing trade is Rs.1,000 but 90% of the time the system will continue to lose a little. It’s like buying the OTM option on expiry day which is trading at Rs.2, option buyers tend to buy such strikes thinking if there is an extreme move in the index on expiry days, this Rs.2 option can move to Rs.200, giving exponential returns. But that doesn’t happen very frequently. So after 100 trades, we will end up with a profit of Rs.10,000 with System B. In spite of losing 90% of the time, this system ended up in profits after 100 trades, because of positive expectancy.

The ideal system to choose is System C, just like a coin toss probability, this System C has winning accuracy of 50% only but its average profit is 2x of its average loss. When the trade goes right it makes Rs.2000 and when it goes wrong it loses only Rs.1000. So after a series of 100 trades, System C is able to generate profit of Rs.50,000. Which is the highest of all other trading systems.

Just because your back test says that you can have 5 continuous losing streaks, it doesn’t mean that at the max you are going to face only 5 back to back losing trades. Anyone who follows a trend following system will have winning accuracy of anywhere between 35% to 45%, but they make exceptional returns because of higher risk reward ratio. Statistically any trading system which has only 40% winning accuracy can have 21 losses in a row. Imagine facing back to back 21 losses? Will you be able to handle it? Yes, if you plan your risk management well in advance. If you are risking 1% of your capital in a trade, then even such 21 losing streaks will not do much damage to your trading capital.

So your risk per trade should be decided based on such losing streaks probability instead of solely relying on your back test parameter.

Most traders care about drawdown, how much percentage i can lose over a period of time with a trading system. As long as it is under control, I can trade that trading system. But many traders tend to ignore another important factor called time draw down. That is, how many trades a system can under perform? How many months can the equity curve stay under water?

This is the most important factor in a trading system, because it will really test the patience of a trader. Imagine making zero returns for 4 months with your intraday trading system? You will be placing the trades every single day, only to regret later after 4 months when the system is still in the drawdown phase. During such periods many traders will lose faith in their system and tend to abandon the system thinking it stopped working. So larger this time period, better to ignore such a system as you might find it psychologically hard to trade that system. Trend following systems mostly fall into this category, when markets are stuck in a sideways phase without a clear direction, trend following systems will be affected badly and may continue to underperform for a long time. But the good thing with the trend following system is the recovery factor is much faster, just one or two trades is enough to recover from drawdown.