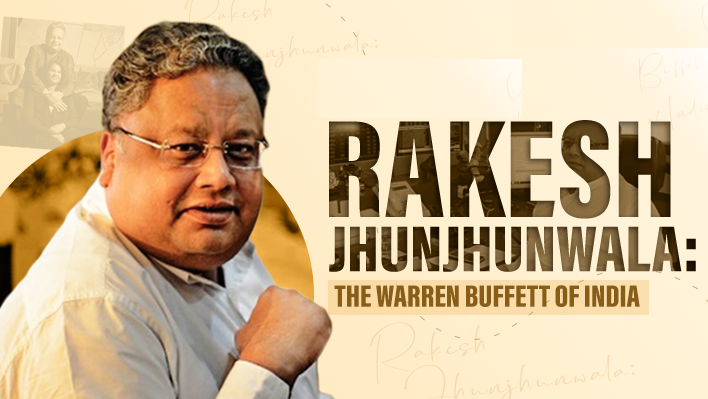 What is Rakesh Jhunjhunwala’s investing strategy, is there a way where we retail investors can follow his strategy, just buy whatever stocks he buys and generate similar returns like him? I did an extensive research on this and this is what I found out.

We all know that Rakesh Jhunjhunwala made headlines recently with his ZEE stock purchase, where he made 67 crores profits in just 6 days. Even though many claims it’s an insider trading, he might have known about the ZEE Sony merger news beforehand, so he bought the stock before the news was made public.

As per bulk deal report from NSE, he bought the stock on 14th Sep 2021 at Rs.220 and on that day ZEE stock closed at Rs.260 and retail traders still got the time to invest in ZEE stock, from Rs.260 the stock went up to Rs.330 in next one week, that’s almost 27% returns. If we had followed the bulk deal report and invested in ZEE stock as per Rakesh Jhunjhunwala, we would have also be sitting with handsome returns.

This made me curious, and I wanted to check, “What if we can follow Rakesh Jhunjhunwala investing strategy?” All we need to do this, follow the bulk deal report and check where does he invest in and simply buy it. And most part of the wealth of Rakesh Jhunjhunwala came from holdings his portfolio of stocks for long term, he doesn’t simply buy and sell often. Remember Warren Buffett once said, “Our Favorite Holding Period Is Forever“

If we can simply mimic Rakesh Jhunjhunwala’s stock selection, there is a higher probability of making great returns. But we cannot simply go with his ZEE stock purchase history, we need more data to conclude if he really made money in the long term through his bulk deals.

I went to NSE website and download all bulk deal reports from 2005 to till date, that’s more than 16 years of data. And look for client name as Rakesh Jhunjhunwala, Rekha Jhunjhunwala and Rare Enterprises. He purchases stocks in his name, his wife name and his company name (RARE is formed by combining first two letters of husband and wife’s name)

I was able to gather all his 15+ years of bulk deal report with details like which stock he bought, at what price, when he bought and how many quantities

Once I got the required details, I just need to upload these transactions to Value Research online portal which would calculate his total returns easily.

Not whatever he touches turns into gold, just like any other normal retail investor, even he made mistakes, he lost more than 90% in some of his investments with companies like A2Z Infra, Dish Tv etc. But the money he lost with such investments are very nominal compared to the profits he made with other companies.

Look at the profits he made from Titan, FSL, Escorts etc, more than 38% of his portfolio is from Titan. He continues to hold a large chunk of it even now. His cost price of Titan was just Rs.22, Titan now trades at 2125 and with First source solution his purchase price was just Rs.10 and now stock trades at 194.

He doesn’t simply buy and exit in a short period, he continues to hold the stock for a very long period, and that’s how multi-baggers are made.

Most of the investors’ wealth follows Pareto principle, where 80% of their profits comes from less than 20% of the stocks, and that’s the case with Rakesh Jhunjhunwala’s bulk deal report as well, more than 80% of his profits came from these 8 stocks

His total investments that he made through bulk deal is worth more than 2500 Crores now, and he was able to beat the index easily at a great margin. But in last 16 years, he has seen the biggest crash which happened in the year 2008, where market plunged more than 60% and many of his stocks went down more than that. But he did not exit from it, he continued to hold, had he sold it during the panic times, he would have not made multifold returns by now.

From the above +16 years of bulk deal data analysis, it is clearly evident why Rakesh Jhunjhunwala is considered as one of the legendary investors in India. We retail traders always focus on the short term noise, that Rs.67 crores he made in 6 days made headlines, but none of the media emphasized the fact of 2000 + Crores he made by holdings his investments for 16 years. To replicate Rakesh Jhunjhunwala Investing strategy, all we need to do is mimic his stock purchase based on bulk deal report, but we should focus on building the conviction to hold on to such stocks for a very long period in order to generate wealth over the long term.