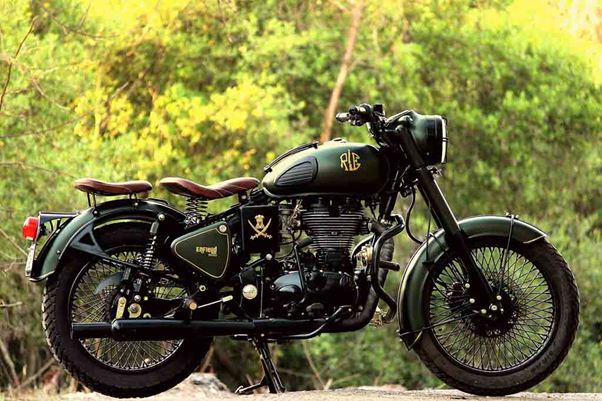 Eicher Motors Limited (EML) is the owner of the iconic Royal Enfield brand.

Royal Enfield is the World’s oldest motorcycle brand in continuous production since 1901 and it is mainly focused on mid-size motorcycles (250 cc-750 cc). Their products are sold in India and 50 countries globally through exclusive stores and dealers.

Eicher Motors Limited (EML) has seen robust management over the decades. Mr. Siddhartha Lal is the Managing Director of Eicher Motors. He also has been the Chief Executive Officer (CEO) of Royal Enfield and the chairman of VE commercial vehicles, a joint venture between Volvo Group and Eicher Motors. He was the one who helped revive the company’s fortune and strengthened stakeholders’ interest and involvement with the brand.

From the above graph, we can see that the stock has outperformed both the indices (Sensex and Nifty) since the company has been listed in NSE and BSE.

However, in the last three years, Eicher motors have been in the downtrend. Eicher Motors was trading at Rs.12000 on April 3, 2020. From that level, it is showing strength now.

The company announced and approved a stock split plan to increase liquidity and to make the shares more affordable to retail investors. Eicher motors board approved 10 for 1 stock split. The company will split each share of Rs. 10 into 10 equity shares of the face value of Rs. 1 each.

What is a stock split?

When a company announces a stock split, the number of outstanding shares of the company increases but the market capitalization remains constant.

Now let us look into the numbers of Eicher Motors based on four aspects namely growth, cash flow, liquidity, and profitability

The current ratio of the company is 3.15 which shows that the company has sufficient current assets to meet the short term obligations

The company has been maintaining positive cash flows over the last 10 years (except 2011 and 2012).

The current Return on Equity (ROE) and Return On Capital Employed (ROCE) of the company is 27.63% and 40.59% respectively.

Also, the company has been maintaining a solid ROCE% of more than 30 over the last 10 years.

Thus, Eicher motors have been profitable for shareholders.

This shows that the company is trading at undervalued levels now

Overall, Eicher motors look like an undervalued company with strong fundamentals. Once the company begins its full operations, we can see an increase in sales and profit of the company and it is safe to buy and add Eicher motors at every dip If you liked this article, please do share share it (Whatsapp, Twitter) with other Traders/Investors.

1 comment on “Is it safe to buy Eicher Motors shares now?”

₹ 699.00 ₹ 408.00
Breadboard, hookup wire, battery Assorted transistor Assorted capacitors Assorted resistors Misccomponents Country of Origin: India
(as of January 20, 2021 - More infoProduct prices and availability are accurate as of the date/time indicated and are subject to change. Any price and availability information displayed on [relevant Amazon Site(s), as applicable] at the time of purchase will apply to the purchase of this product.)

(8)
₹ 140.00 ₹ 89.00
high quality and Low price Package include :- 1pcs 4 channel led chaser CD4017BE , NE555 ic and 47uf capacitor 100k presist for adjust speed and time
(as of January 20, 2021 - More infoProduct prices and availability are accurate as of the date/time indicated and are subject to change. Any price and availability information displayed on [relevant Amazon Site(s), as applicable] at the time of purchase will apply to the purchase of this product.)

₹ 2,200.00 ₹ 998.00
Warranty service : repair. Package contain : 1 water level controller unit. 2 carbon sensors. 1 pack, mounting screw. 1 user manual with technical details Working : this controller will start the motor by pressing start button of the controller and i... read more
(as of January 20, 2021 - More infoProduct prices and availability are accurate as of the date/time indicated and are subject to change. Any price and availability information displayed on [relevant Amazon Site(s), as applicable] at the time of purchase will apply to the purchase of this product.)

The rise of Bitcoin and  Historical data analysis of Bitcoin January 11, 2021

Recent IPOs and their performance December 14, 2020

List of Top 10 Stock Market Investors in India and their portfolio December 11, 2020