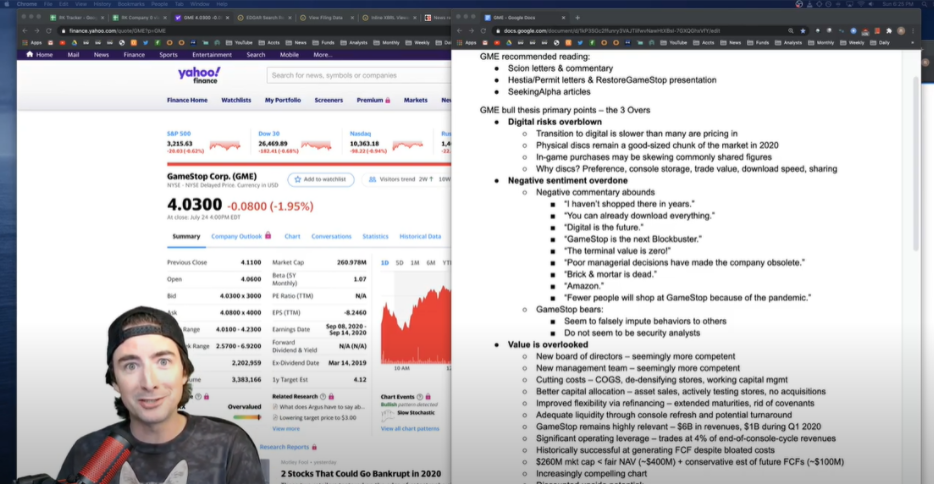 Here’s a live example of retail trader like you and me, who turned $50,000 Investment into $50 million profits.

A relatively unknown stock called GameStop was trading around just $5 five months before and now its is trading around $350, which is 6900% returns in five months. Insane returns, there is nothing fundamentally changed in the company business(GameStop is an American video game, consumer electronics, and gaming merchandise retailer), and its not being acquired for multi million dollars, in fact Game stop reported loss $275 Million in last 12 months. Then how did this stock move up so much in short span? Who gained and who lost? Let’s find out.

Most of you would have watched The Big Short movie, its about famous hedge fund manager Michael Burry who made billions during 2008 global financial crisis by betting against the housing market bubble. In April 2020, through his hedge fund Scion Asset Management, invested $17 million and bought a stake in GameStop stock, just like here in India, if any large fund house or big investor purchase large quantity of shares of any company, it has to be reported to exchange as per SEBI gudielines. Similarly in US, these large transactions should be reported to SEC. Once this news of large fund buying a stake in gaming stock gathered so much attention among retail traders.

But this alone did not trigger the upmove for GameStop stock, if you check the above chart, you can the stock price did not move much until Sep 2020. Then what caused this huge move?

It’s all started by a normal retail trader like you and me, who posted Youtube video 6 months before explaining about the GameStop stock when it was trading around $4, he explained why he is bullish on this stock with all his analysis. But this video didn’t go viral and more traders bought the stock, its just had some 60k views and he is not a social media influencer with millions of subscribers, he just had less than 5k subscribers when he posted this video. But what made viral was his post on reddit.

A reddit group called wallstreetbets where group of traders discuss about their stock trading bets, most of the posts will be like hero or zero trades, either they make huge returns or they lose all. So this trader with user name DeepFuckingValue, shared a post in reddit in 2019 that he invested around $50,000 in call options on GameStop stock. First, let me explain why most retail traders buy options instead of buying shares.

So options are great if you have a relatively small amount of money and want to take a lot of risk with it. This is what this retail trader did, he want to gamble with $50,000 on call options of GameStop stock, where he bought long term contracts with Jan 2021 expiry and shared the screenshot of his orderbook. Remember he bought his this options in the year 2019.

But after he posted this trade, almost every other retail trader ridiculed him, many traders said its such a bad trade, obviously he is going to loss all. Look at the comments in reddit one year ago, everybody believed this stock is going to tank and but this trader got the conviction on this trades, so he simply held onto it.

But after few months from Sep 2019 onwards, his positions started making profits. His $50,000 investment made $62,000 profits but he did not sell positions, he kept on holding it.

Then came the quarterly Q3 earnings report, the stock price started to go down, so his call options also started going down. His gain was wiped out after the quarterly earnings and by Feb 2020 he was on the verge of losing it all.

And people again criticized him that even the GameStop company itself did not have confidence in their business where they have cut the Earnings per share guidance by 90%, why would someone still hold long trades inspite of such bearish fundamental news? He responded that he is not bothered about what the company did, instead he is all focused on what the company is going to do in the future and still firmly believes that stock would move up. Instead he averaged down his buy price, buying even more call options, moving his total investment to $80k by december end.

But things started changed post Sep 2020, where stock price of GameStop moved from $4 to $10 where this trader is up 400% where he eventually increased his investment from $50,000 to $160k by averaging his buy price with every decline.

Millions of reddit users eventually started following this post, what happened after that was pure herd mentality, where more traders started buying GME stock which in turn pushed up the price even further. By Novemeber 2020, the stock price climbed even higher to $15 by then he made his first million dollar profits. After holding his trade for a year, he made spectacular profits. But did he sell now? After all the stock moved from $4 to $15 without much change in fundamentals, so many people believed the stock can fall back to its previous low price again. But this trader, still held onto his trade.

A certain set of hedge funds were short $GME. One of them is Melvin Capital, Melvin runs $12 billion and one of the bets it took was that the GME shares would drop in value. A typical short position need not make any attention, but Melvin had bought a large number of “put” options, which have to be disclosed. The value of these put options was $55 million — not a big percentage of the Melvin fund (less than 1%) but this formed a trigger for the move up as well.

WallStreetBets(reddit traders) decided Melvin was going to be the fall guy, and they further piled on to the stock. More than 4 million users follow this group in reddit, everyone started buying the stock. Adding to the fuel, many large institutional traders started buying it which pushed up the stock price.

Stock moved from $15 to $350 in less than a month, so traders/fund houses which shorted the stock were in deep loss and hurried to buy back the shares which in turn pushed the price even higher. Eventually Melvin capital closed its short positions yesterday with multi million dollar loss.

But the reddit trader with user name DeepFuckingValue who started all this year ago, is now sitting with around $50 million dollar profits. Kudos to the conviction of this trader, when most of the retail traders buy at 100 and sell at 120 and become extremely happy and content about it, here’s trader who held onto his trade with strong conviction and became a multi millionaire with just one trade.

Many traders in reddit who followed his post and invested in Gamestop stock made huge returns, year ago same reddit users bashed him hard that he is dumbfuck, now the same users are praising him and thanking him. Its because seriously many traders who traded in this stock, made huge returns in short span of time.

The Gamestop saga is a powerful reminder that investing is not the study of finance. It’s the study of how people behave with money, and sometimes those behaviors are incredible. — Morgan Housel

15 comments on “How a retail trader turned $50,000 into $50 Million Story of GameStop Short squeeze”

(14991)
₹209.00 (as of February 4, 2023 - More infoProduct prices and availability are accurate as of the date/time indicated and are subject to change. Any price and availability information displayed on [relevant Amazon Site(s), as applicable] at the time of purchase will apply to the purchase of this product.)

₹299.00 (as of February 4, 2023 - More infoProduct prices and availability are accurate as of the date/time indicated and are subject to change. Any price and availability information displayed on [relevant Amazon Site(s), as applicable] at the time of purchase will apply to the purchase of this product.)

₹299.00 ₹190.00
Stock Market Invincible P R Sunder 9789349200609 Mukul Aggarwal Arvind Arora Pushkar Raj Thakur Anant Ladha
(as of February 4, 2023 - More infoProduct prices and availability are accurate as of the date/time indicated and are subject to change. Any price and availability information displayed on [relevant Amazon Site(s), as applicable] at the time of purchase will apply to the purchase of this product.)