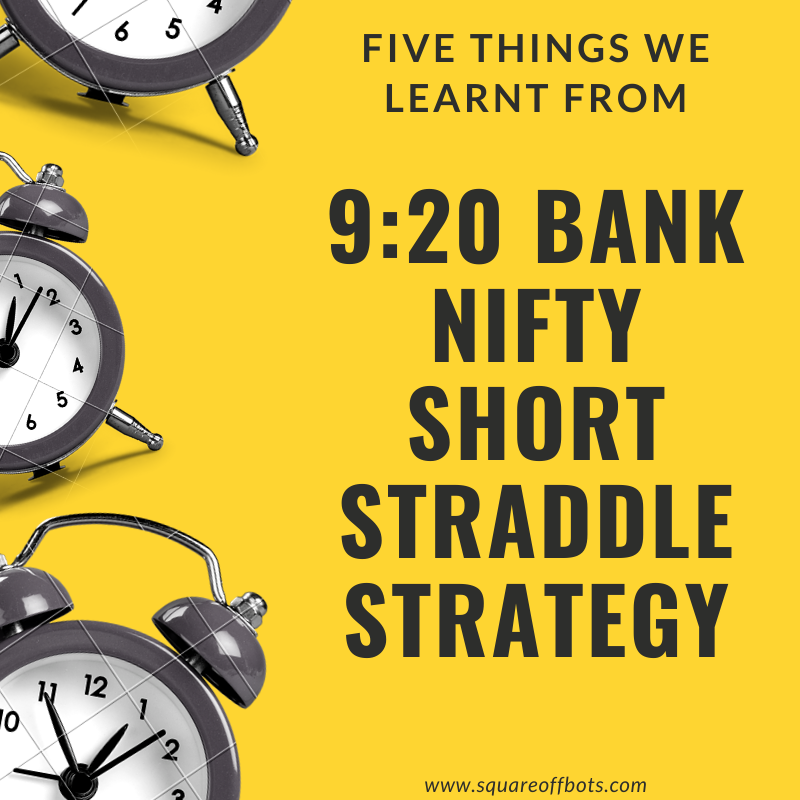 It’s all started on 24th August 2020 with just Rs.12450 profit. That was the day when we added 9:20 Bank Nifty short straddle as one of the strategy with Squareoff Trading bots. In last one year, it has made almost 1.2 Crores cumulative profit from all the Straddle bot users.

Considering in percentage terms that’s almost 85% profits after slippages before transaction charges, considering just one trade a day, brokerage cost doesn’t incur much with this strategy.

Many beginners have a common myth that if something so simple, it wouldn’t work. But what I have observed in last 13 years trading this market is Simple things always do wonders than complex trading systems. When you trade with multiple parameters, we always tend to curve fit the system with so many filters and logic. But keeping it simple will give us a clear picture on why a trading is working and most importantly when market goes out of sync it also tells us why it is in drawdown. If we trade with multiple parameters, we won’t be able to easily identify which parameter is causing the drawdown. Trading simple stuff makes one very disciplined, you will be able to follow the system during drawdown times, which is the most important factor in trading.

2. No leverage is better than over leverage:

Before the introduction of SEBI’s peak margin rule, many of the 9:20 Straddle bot users don’t follow our recommended capital. Instead they check what is the margin required by the broker and trade accordingly. If a broker blocks only Rs.50,000 per lot and if the trader has 5 lacs capital, then he ends up trading 10 lots. Consider the below table, usually Bank nifty ATM option premium varies between 500 and 150, at the start of the expiry on Fridays, consider it is trading at 500, stop loss we use is 25%, which is 125 points, with worst case scenario of stop loss getting hit on both CE and PE Side, we end up losing Rs. 125*25(lot size)*2(lots) = Rs.6250.

If someone was trading with Rs.50,000 per lot, then he would have ended up losing more than 10% of his capital in just one day. However, if he was trading with 2 lacs or 3 lacs capital per lot, then he would have lost only 2% of his capital. It makes a huge difference, back then many brokers were giving extreme leverage due to which many beginners trade with high leverage and end up blowing their account. Shown below, one such comment from a trader who traded the bot with high leverage.

But this is not going to happen any more, because now traders don’t have a choice since the margin benefit is completely removed and now people are trading with 3 lacs per lot to trade the short straddle strategy.

No matter what kind of strategy one follows, drawdowns are inevitable. You can’t avoid it. Markets go through different volatility phases, during such times your trading strategies can under perform for longer time. Between Feb 19th 2021 to April 7th 2021, Bank nifty 9:20 short straddle was underwater, for two and half months, the strategy did not make positive returns.

This is the period many trading bot users lost confidence in the strategy. You can see the below comments from users. Such drawdown phase would shake the confidence of traders, they tend to doubt whether this is a normal drawdown phase or the strategy stopped working completely? Should I make any tweaks? Should I shift to paper trading for a while? All these doubts would creep in.

But trading bot users who had the faith and right discipline followed the system and continued trading the 9:20 straddle bot. It not only recovered from drawdown in two months, it continued to make profits and hit a new equity high. How you react during this drawdown phase decides your over all success.

This strategy has much higher winning accuracy of greater than 66%, out of 156 trading days in 2021, it has ended up making profits for 103 days.

4. It is a trend following Strategy

The 9:20 Bank Nifty short straddle is not a strategy for range bound markets, in fact it does well on trending markets. Less than 10% of the profits from Short straddle came from range bound markets. As you can see from below analysis, 74% of the time either CE or PE stop loss was hit, which denotes when the market trends in one-sided direction, the CE or PE position gets closed much earlier due to stop loss hit and the other side position continued to decay thus ending with higher profits most of the time. And only less than 20% of the time stop loss was hit on both sides.

5. Slippages are overrated, Executions are underrated

Many traders are worried about slippages, just like drawdowns are inevitable, slippages are also the same, it can’t be avoided completely, but it can be controlled with robust execution infrastructure. Trading execution for a single account is completely different from handling 100s of different accounts. We followed multiple robust execution system at Squareoff that enabled flawless execution to all its users, with minimal impact, that’s how we are able to achieve 85% returns with such large capital. Earlier when NSE followed range execution system, at times due to sudden move in Bank Nifty, option price swing wildly with in a minute, in such cases NSE will cancel all pending stop loss orders with 17070 range execution error, on such days our bot monitors the position of all users every second, for any user if SL is cancelled due to such erros from NSE, the bot will automatically send exit orders at frequent intervals and ensures there is no open positions. Even the Freak trades are controlled through limit modifier programs.

The three pillars of a successful trader are following the right trading strategy that has an edge, which is simple in rules so that it makes the trader more disciplined in following the strategy and above all, once you deploy the strategy with right position sizing, you will realize you have found the holly grail in markets.

If you haven’t tried our bots yet, check out SquareoffBots