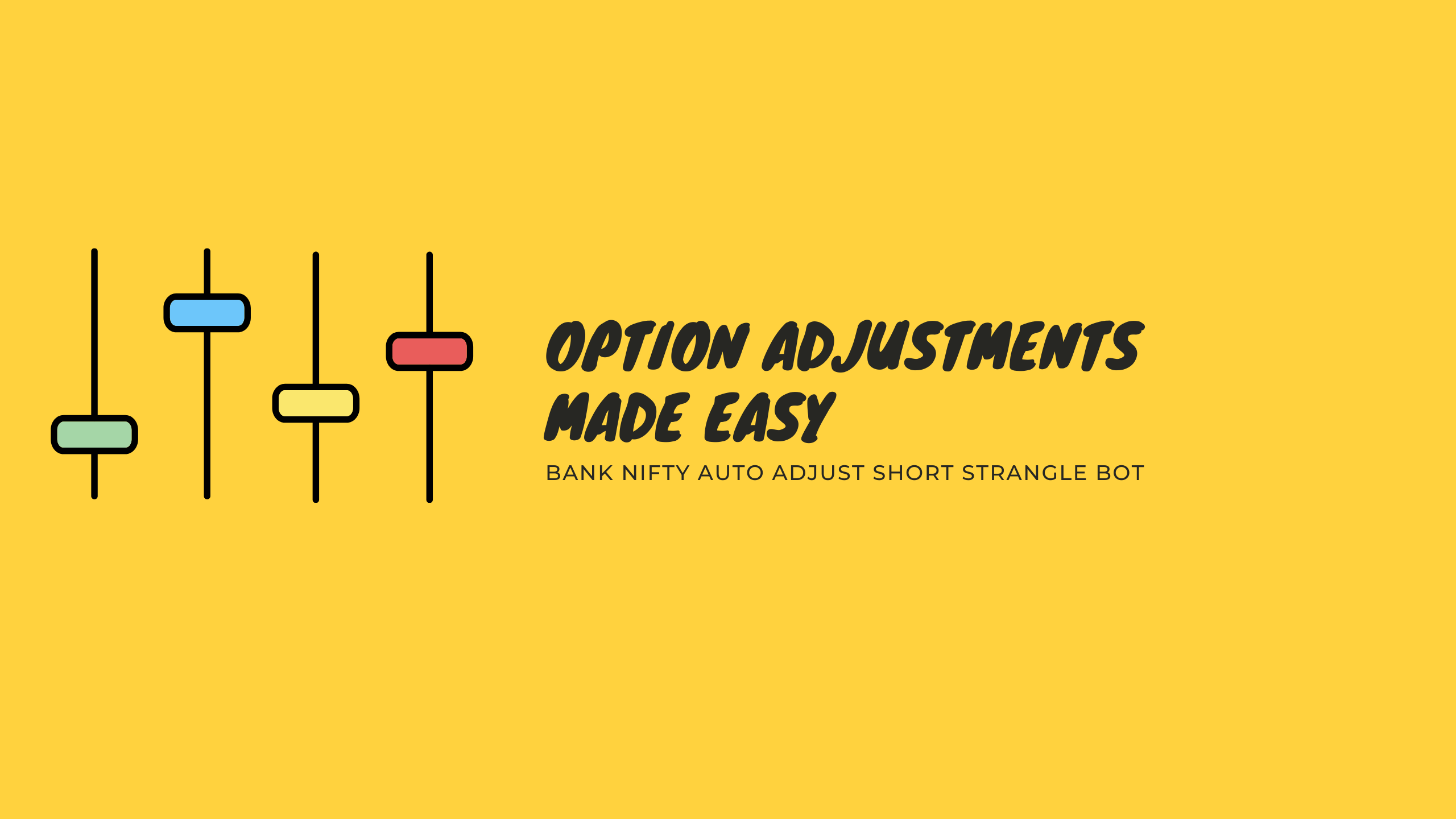 This strategy is designed to make profits from directional less market, if the market is really trending one side either on the upside or on the downside, most of the time such trends would be captured by BSS Bank Nifty short straddle bot or from Directional system by Machine learning bot. To a certain extent 1% Short straddle bot would help us in making profits as long as Bank Nifty moves with -1% to +1%.

But many times Bank Nifty makes erratic moves which hits the stop loss of most of the system. If we could design a system which is not prone to such erratic moves and also make profits through theta decay it would greatly help us. So we started tracking every data from option OI, IV, Volumes, VIX data and Bank Nifty index movement. Designed a Short strangle strategy which would keep tracking all the data and makes necessary adjustment in call option or put option. It would initiate the trade only after 10:15 am, it waits for 1 hour after market opens and collects all the necessary data. Once data is collected, it initiates a strangle position based on how strong the market is for that day. At times it can trigger short straddle as well.

Similarly if market is expected to go down, then it would shift the call option closer to current underlying levels and shift the put option to farther levels. So there will always be an open position throughout the intraday period, both call and put option will remain open, it would only move up or move down the option legs based on the data it analysis. There will not be any fixed stop loss it uses in the system since it only adjust the positions throughout the day.

This system will greatly help us in making profits during zig zag market moves, that’s when most of the other trading setups gets into losses due to fixed stop loss. Since this system automatically tracks and adjust the positions, it would end up in profits on such days.

We have deployed it live in our account. Its been running live since Sep-21, it made more than 22% net returns after all charges and slippages with max drawdown as low as -5% only. Inspite of such extremely volatile period that we witnessed in recent past, its able to make very good returns.

The recommended capital to trade this bot is around 2.5 lacs to 3 lacs per lot. It would trade only in Bank Nifty weekly option. On an average it triggers around 12 trades, at times when there is extreme movement it can trigger high no of trades as well. But it ends up making profits mostly on monthly basis even after all charges. This auto short strangle bot would act as uncorrelated system for people who are trading strategies like 920 short straddle or Machine learning bot or any other such strategies with fixed stop loss, as Auto Short Strangle bot makes profits during zig zag moves and controls the loss during big trending moves, On trending moves these system mostly captures the profits.

You just have to give input lot size to the bots every day, just like with any other bot. It will start placing orders after 10:15 am with a dummy Stop loss orders, the bot will use these pending dummy SL orders to modify and send exit signal when adjustments happens. So instead of having a short strangle open position without any fixed SL, it will place short strangle orders along with a dummy SL (which will be much wider, around 450 points) we keep this wider SL as a part of risk management, there will be enough room for strangles to move against us with this wider SL, and when option data indicates an option adjustment, it will automatically edit the pending dummy SL and exit the positions and create new one. The orders placed automatically after 10:15 am .